This year the BBKA (British Beekeepers Association) have to decided to have a special Asian Hornet week from 10th to 16th September.

Beekeepers are concerned about the spread of Asian Hornets because a large part of their diet is honey bees. Apparently each hornet can eat 200 honey bees every day – it is easy to see how a honey bee colony could be decimated very quickly by a nest of these hornets.

Asian Hornets originated from Southeast Asia, but has been steadily spreading. They were first accidentally introduced into France in 2004 and have now spread over the whole country. Significant numbers of honey bee colonies have been lost.

This year several nests have been discovered on Jersey.

Last week an Asian Hornet was spotted by a beekeeper in Fowey in Cornwall. The National Bee Unit was able to track the hornet to its nest, which was then destroyed. Today there is news that there have been two more sightings in Hull and Liskeard.

The BBKA are asking all beekeepers to take some time over this week to watch their hives. The Asian Hornets will hover outside the hive and grab bees as they head home.

It is important for us to be able to correctly identify the Asian Hornet correctly and not to confuse it with the European Hornet and other large insects. 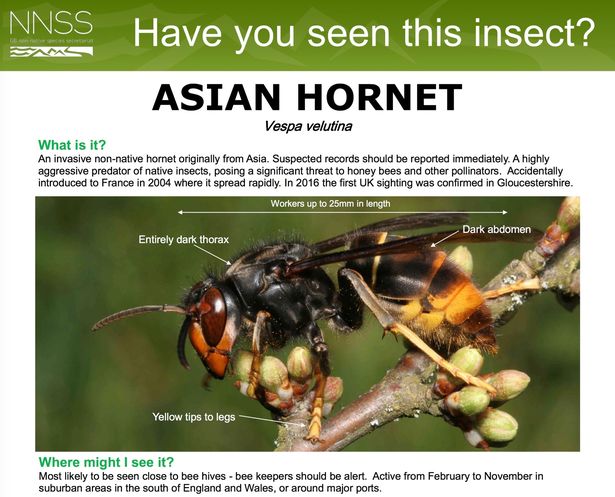 If you think that you spot one, please report it to alertnonnative@ceh.ac.uk ideally with a photograph. Don’t try and catch one as they have a sting!

This is a very serious threat to our honey bees and native insects – please do keep an eye out and report any sightings promptly.