In front of our house we had a small, north facing lawn. We never used it and it was a chore to keep it mown. I had always thought that because it is north facing, it would get a relatively small amount of direct sun, which would limit what can be grown there. However, being at home more than usual over the past year gave me time to watch how much direct sun it actually gets. I was surprised that from March until October it has around 6 hours each day, which is plenty for many flowering plants that bees like to forage on.

I didn’t like the idea of digging up all the grass, or using a herbicide to kill it off, so we decided to use the “No Dig” method advocated by Charles Dowding. We’ve used this method successfully in the past to create a vegetable patch in our back garden. It’s super simple – you lay down a layer of carboard over the entire area, then cover it with compost. You can then sow or plant directly into the compost. Over time the card will rot and the grass will die. I waited until our recycling collection day and collected all the card in the neighbourhood! There was more than enough to make a good layer. 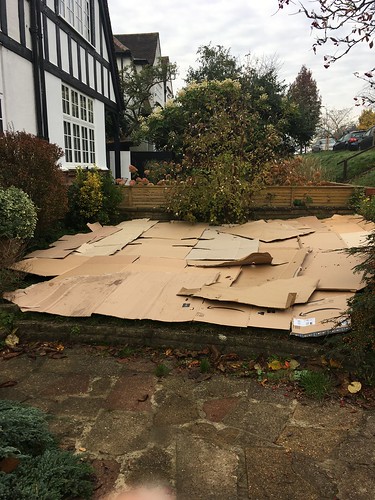 I then added a layer of compost. Some I bought and some we’ve made. We compost nearly all our kitchen scraps and garden trimmings, so we had quite a good stash. Here it is layered up. 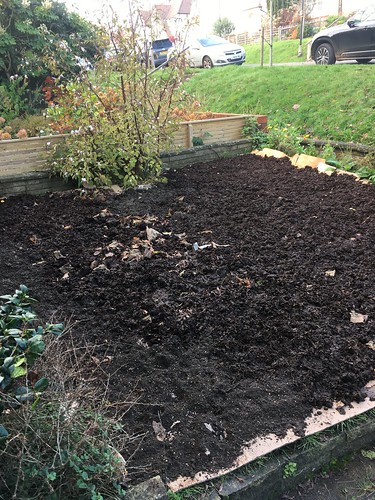 The plan is to sow a lot of flower seeds in March, which I’m hoping will then bloom right through until around November. To add some earlier flowers, I poked holes through the card board and planted lots of spring bulbs. They are now poking their noses through the compost layer, so it shouldn’t be too long before there is some colour in the muddy patch! 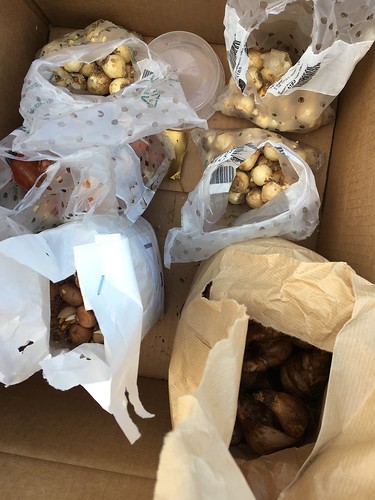 In the autumn I also sowed some biennials, such as Foxgloves and Sweet Williams, which are overwintering in our tiny greenhouse – I’ll plant them out once the risk of frosts have past.

The hope is that we will have a feast for bees and other pollinators from spring until late autumn – much better than a boring lawn!