Swarm season is upon us. Typically people say that colonies swarm between May and July, but our colonies have other ideas. Bees swarm to create a new colony. It is an entirely natural process and actually rather fascinating. Most beekeepers attempt to prevent swarming because once a colony has swarmed you have lost a good deal of your workforce.

We have one very strong hive at home and one at Hendon, a couple of weeks ago I noticed that they each had started making queen cups, which are special cells in the comb to grow a new queen bee in. Last week I saw that the queen had laid eggs in these which means that the colony is preparing to swarm. I decided to artificially swarm both of these hives, which involves splitting the colony into two hives. Thank goodness I had spare hives ready! In one I put all the brood (along with the queen cells, that will turn into new queens) and in the other I put the queen and all the flying bees. This is supposed to convince the bees that they have already swarmed. So far so good…

Two days later we were having lunch, A looked out of the window and remarked that there were rather a lot of bees out – my heart sunk – we had a swarm. We raced up to the roof to see bees pouring out of the hive that I’d put the queen and the flying bees into. Luckily they clustered in a tree on the edge of our garden and I was able to retrieve them easily.

Here they are clustered in the tree 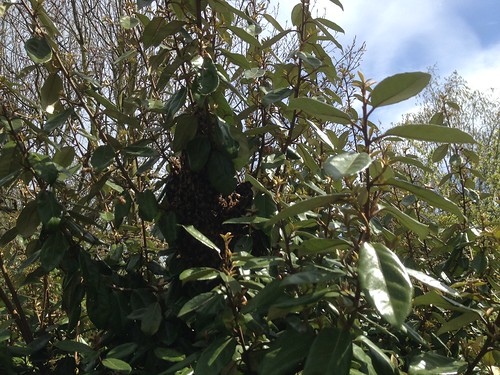 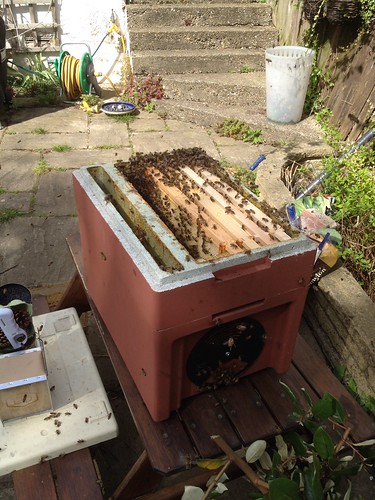 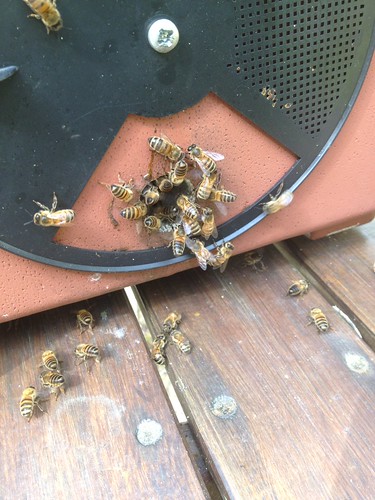