As well as our home hives I’ve been running two more hives in Hendon this season. They are about 4 miles away from where we live, so the bees are exposed to some different flowers to forage on. I have been hoping that is would give us some differently flavoured honey.

Today we went there to check on the hives. 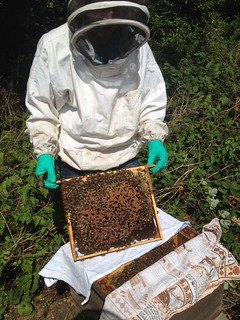 Everything looked alright in both hives. One of the colonies was very weak when I first took them on in June, but they seem to be gaining in strength all the time which is encouraging.

The second hive has a colony that I took there after doing an artificial swarm earlier in the season. I hadn’t expected to take any honey from them this year as it was a pretty small colony when I moved them. However, they have been doing so well that I was able to take a few capped frames full of honey today.

J and his dad helped us out today and were rewarded with their first taste of honey straight from the hive! 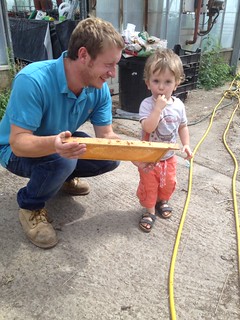 Back at home we quickly got to work extracting the honey. It has an amazing flavour – almost orangey and quite different to our home honey. 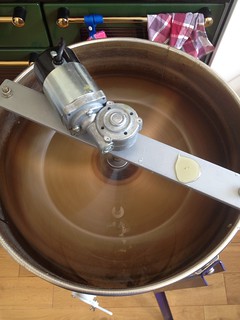