I glanced out of the window earlier and was alarmed to see thousands of bees in the air. My first thought was “SWARM!” and raced up to the roof to look at the hives. (I have absolutely no idea what I thought I was going to do though…)

When I got there I realised that rather than swarming – where all the bees pour out of the hive, the opposite was happening – all the bees were racing into the hives. About 10 seconds later there was an enormous crack of thunder and torrential rain began.  I must have seen all the foragers dashing for cover before the storm began! These tiny creatures really amaze me. 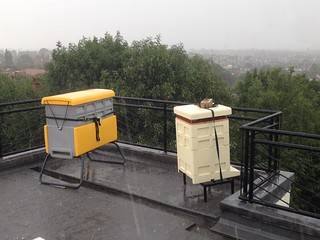 Within a couple of minutes of the rain slowing they were back out, hard at work again.